2. Interviewed and featured by Spotlight Inc, funded by and for TELUS optic TV “Probiotics for bats against WNS; entitled the long shot saving western bats” filmed on May 5, 6 and 7, 2019 to be aired TBA.  Posted on YouTube on Nov 11, 2019

3. Interviewed and featured by Seeker titled “Is the Cure for Superbugs Hiding Deep Under the Earth?” November 6 and 9, 2018 by published online September 24, 2017.  Seeker, a science media network based in San Francisco. We produce videos about all things science, exploration, and tech, and we are working on a short documentary series in partnership with USAF that celebrates unique research.

5. Interviewed and featured by Francois-Xavier De Ruydts, an independent film maker for the Francophone Canadian TV series on the natural history of Canada (TV5 and/or UNIS TV: http://www.terresdexploration.ca) (Filmed on March 14, 2017).  To be aired April 2018.

6. Interviewed and featured by Bloomberg TV aired online entitled “Stalking Cave Bacteria to Make Secret Weapons Against Superbugs” on May 3, 2016 at the link below: https://www.bloomberg.com/news/videos/2016-05-03/life-saving-anitbiotics-could-be-hidden-in-caves/

9. Featured in the documentary “The Antibiotic Hunters” by the Nature of Things (filmed on April 25, June 5 and early July 2014 at the iron Curtain Cave and TRU Microbiology lab). Aired on March 5, 2015.  http://www.cbc.ca/natureofthings/episodes//the-antibiotic-hunters

10. Mentioned as a collaborator in an interview of Dr. Cori Lausen on Global TV on “White nose syndrome threating bats across Canada” on October 27, 2014. http://globalnews.ca/news/1637252/white-nose-syndrome-threatening-bats-across-canada/?hootPostID=eb11039826eed0d0b66a60a61d3bf407

12. Featured by the Leading Edge Knowledge Network program of Knowledge network TV for a research activity at alkaline ponds. Aired in February 2005.

13. Featured by the Body & Health program of Global TV for a research activity at caves in Wells Gray Park. Aired in March 2004.

2. Quoted in an article by Christian Stenner, a caver, in Canadian Geographic, online on September 5, 2019 https://www.canadiangeographic.ca/article/return-raspberry-rising

4. Featured in the UK Wired magazine by Tom Ward in the article entitled “Inside the slimy underground hunt for humanity’s antibiotic saviour” online posted on August 28, 2018

7. Interviewed and featured by Sharon Oosthoek of New Scientist in an article entitled “The yogurt cure: can ‘good’ bacteria save bats?’ published online on April 18, 2018. https://www.newscientist.com/article/mg23831741-100-the-yogurt-cure-can-good-bacteria-save-bats/

9. Mentioned in an article entitled “Bat Patrol: One of nature’s least loved creatures is in crisis — and we could all end up paying the price” By Elena Gritzan published online at The United Church Observer (UCOBSERVER) (link below) and in the Reader’s Digest March 2018 pp; 90-96. http://www.ucobserver.org/environment/2017/09/bat_patrol/

11. Interviewed on the article entitled “Researchers developing probiotic cocktail to combat deadly bat disease” posted on Inside TRU on October 24, 2017.

12. CBC What’s your story? Celebrating 150 years anniversary: ‘You’re not half you’re double’: Helping my mixed-race son learn who he is” was selected and published online at on September 2017. http://www.cbc.ca/2017/whatsyourstory/you-re-not-half-you-re-double-helping-my-mixed-race-son-learn-who-he-is-1.4278925

15. Interviewed and featured by Kate Baggaley, science writer/reporter of the Popular Science website (com) on a story entitled “Scientists are spelunking for cave gunk to fight superbugs” on Monday May 14, 2017. Online on May 23, 2017 http://www.popsci.com/superbug-antibiotic-cave

16. Interviewed and cited by Veronica Kos of TRU Omega in the article entitled “Visiting speaker will address women in STEM.” http://truomega.ca/2017/02/28/visiting-speaker-will-address-women-in-stem/

17. Interviewed and featured in an article entitled “Motes from Underground: Will cave soil save us from drug-resistant superbugs?” written by Peter Andrey Smith for Harper’s Magazine and was published on December 7, 2015. Available from  http://harpers.org/archive/2015/12/motes-from-underground/ and http://www.peterandreysmith.com/clip/underground.pdf

18. In the news article entitled “Microbes Art Us – TRU exhibition on at Science World: A TRU professor and her students have created an art exhibit on display in Vancouver.” Daybreak Kamloops: CBC News posted on September 29, 2015.  http://www.cbc.ca/news/canada/kamloops/microbes-art-us-tru-exhibition-on-at-science-world-1.3248557

19. Interviewed and featured by Ryan Stuart for the Kootenay Mountain Culture Magazine (Science Issue) for an article on “Deep and Sick” Issue Summer 2015.

20. Featured in an article “Scientific Discovery for Students” in Kamloops This Week by Dale Bass on January 23, 2015. http://www.kamloopsthisweek.com/scientific-discovery-students/

21. Information on The Nature of Things profile cave microbiomes and drug discovery research posted on InsideTRU and Kamloops news on Castanet on March 15, 2015. https://inside.tru.ca/2015/03/05/nature-of-things-profiles-cheepthams-research/  http://www.castanet.net/news/Kamloops/134393/TRU-on-Nature-of-Things

23. Interviewed in the Metro News: http://metronews.ca/news/canada/100474/cave-could-be-source-of-new-antibiotics/ Cave could be source of new antibiotics. April 11, 2012

24. Interviewed and featured in an article entitled “The cave mappers: Nicholaus Vieira and his team map one of the largest caves in Canada” by Joshua Rapp Learn in the Canadian Geographic April 2014 issue page 36-37 and online at http://www.canadiangeographic.ca/magazine/apr14/expeditions.asp

28. Interviewed in an article entitled “When art meets science, beautiful things happen” in the Kamloops This Week. January 17, 2014 pA21-A22.

34. Interviewed and featured in “A trio of professors has undertaken research into antibiotics and methods to combat superbugs” in then the TRU Student Newspaper by Mark Hendricks, appearing online November 2013. http://truomega.ca/2013/11/05/trus-antibiotic-superteam/

35. Interviewed and featured in the British Columbia Magazine in an article entitled “CaveRx”in Winter issue 2012 p. 12.

36. Interviewed and quoted by the Canadian Press in regards to the publication entitled “Antibiotic resistance is prevalent in isolated cave microbiome” published in PLoS ONE on April 11, 2012.

38. Interviewed and quoted in the Just Ask Us (Reader’s Reporter) Editor’s column of the Daily News, Kamloops on Wednesday October 27, 2010 on diversity (pickle-weed) of alkaline ponds.

39. Interviewed and featured as a Scientist of the Month by the Office of Science and Technology (OSTC) Royal Thai Embassy, Washington DC in 2011.

42. Interviewed and featured in an article entitled “Finding cures from caves” published in a local magazine entitled “Nature West,” p. 2 – 3 in April 2003. 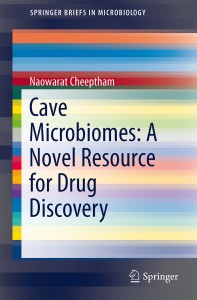